I love going to the theater and seeing productions everyone’s talking about; but every once in a while, I get to see a new play that hasn’t yet hit the critics’ radar screens. Denver is fortunate to be the venue where many productions premier their plays before heading to New York or embarking on a national tour. That was the case with Sense & Sensibility: The Musical. 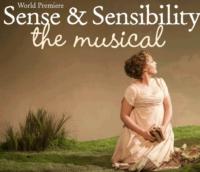 It’s a charming version of one of my favorite Jane Austen novels and it didn’t disappoint me. The cast was exceptional, the costumes by Emilio Sosa (one of my all-time favorite Project Runway designers) were a visual treat, and the music and lyrics helped move the story along. I’ll even confess to getting a little misty-eyed during Marianne and Colonel Brandon’s duet; it was so sweet and touching! (You’ll see Marianne and the Colonel at the 1:15 mark on the video below.)

I hope you get a chance to see this wonderful production. In the meantime, follow this link to the Facebook page for Sense & Sensibility: the Musical, where you can read more about the production, see pictures of the performance, and hear the songs.

Click on this link to read an article from Broadway World about the sold-out performances of SSTM’s Denver world premier.