I saw my first adaptation of Pride and Prejudice on television in the 1960s, one afternoon at home with my sisters while my parents were at work. It was the 1940 black-and-white movie starring Greer Garson and Lawrence Olivier. Because I hadn’t yet read Jane Austen’s masterpiece at the time, I viewed the movie as just another enjoyable Hollywood comedy.

Produced by MGM studios, the movie was released on July 26, 1940 to rave reviews. Newspaper and magazine columnists described the movie as “brilliant,” charming,” and “hilarious.”

All those descriptors suited MGM, since the studio made a deliberate decision to mine the novel for as many comedic aspects as possible, and their advertisements reflected that intention. Here’s one of their newspaper ads, which opens with the words, “Bachelors Beware!” 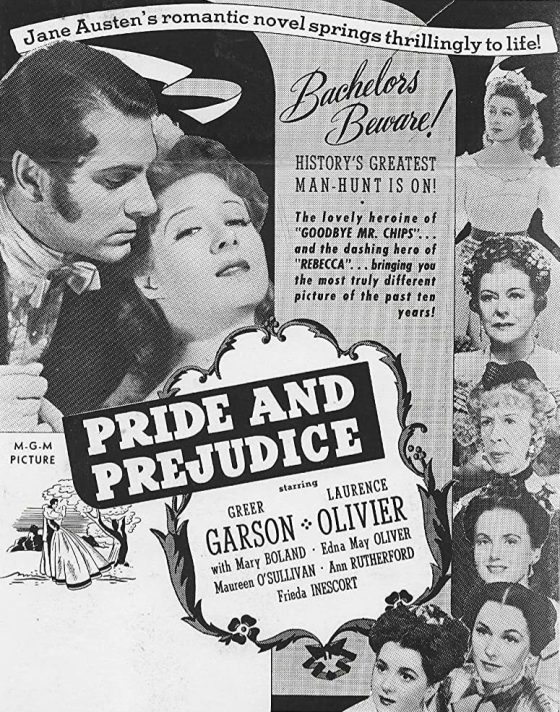 The ad below promised the movie would take viewers on “The Merriest Man-Hunt”:

And this movie poster proclaims the story takes place during a time “when pretty girls t-e-a-s-e-d men into marriage.” 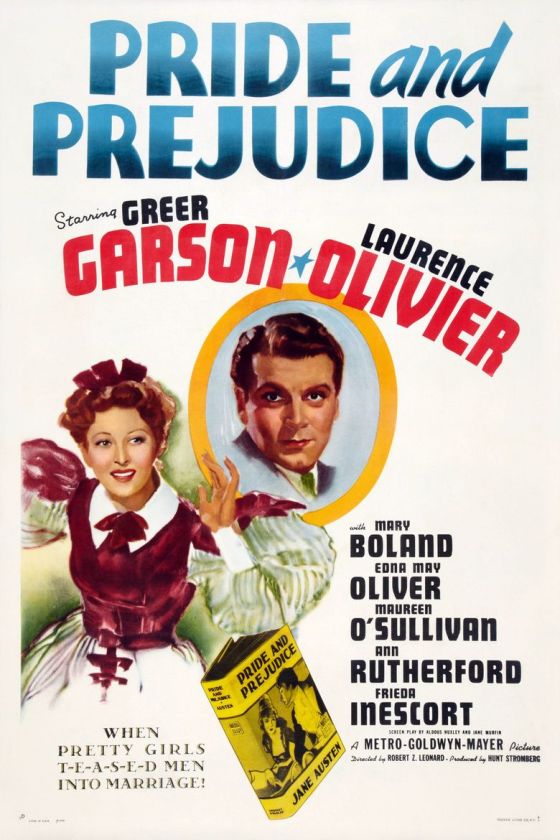 Movie-goers ate it all up with a spoon and a smile. Book stores and movie theaters gave away copies of the novel in promotional campaigns.

Part of an ad in The Semi-Weekly Spokesman Review (Spokane, Washington) on Sunday, October 13, 1940.

One newspaper encouraged readers to submit stories (in 100 words or less) about how “pride or prejudice cost you a girl friend, boy friend, a friend or a job.” The prize: a copy of Pride and Prejudice autographed by the film’s star, Greer Garson.

A couple years after I first saw the movie on television I read the novel and found the film was only somewhat faithful to the original. Here’s an early scene in the movie where Darcy (second from left) insults Elizabeth Bennet (second from right) at the Meryton assembly:

But while the scene appears visually faithful to the book, the dialog was altered for the movie. Jane Austen wrote Darcy’s insult in this way:

She is tolerable, but not handsome enough to tempt me; I am in no humour at present to give consequence to young ladies who are slighted by other men.

But in the movie, Darcy’s insult was altered so it was directed toward the assembly in general, not toward Elizabeth in particular:

Yes, she looks tolerable enough, but I am in no humor tonight to give consequence to the middle classes at play.

In another scene that rings true, Jane and Elizabeth tend Mrs. Bennet’s poor nerves while their father looks on:

MGM’s commitment to going for the big laughs is what probably led to several scenes that never appeared in the book, like the ridiculously improbable carriage race in the beginning of the movie. It also led to scenes like this one, where Mr. Collins and Mary Bennet show off their musical talents (or lack thereof):

The studio also added an archery scene that never appeared in Austen’s novel, although it is effective in conveying Darcy’s and Elizabeth’s personalities:

For me, the most jarring aspect of the movie is the costumes, which were created by famed Hollywood designer, Adrian. 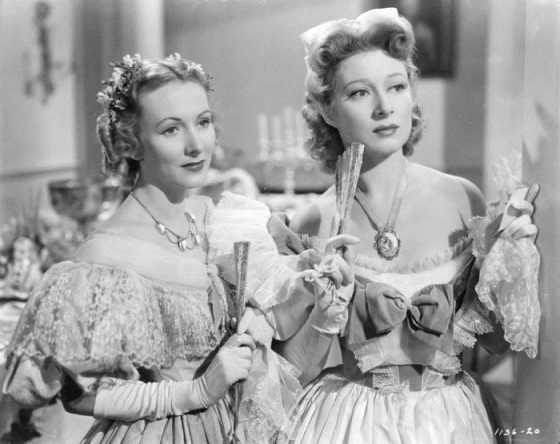 An example of the over-the-top costumes worn by the characters of Charlotte Lucas and Elizabeth Bennet in the film.

Adrian did his research and was aware of the Grecian-inspired style of clothing in vogue during the time period in which Pride and Prejudice takes place; but for this film he decided to follow his own taste, instead. An article in the May 19, 1940 issue of The Detroit Free Press explains why:

Excerpt from an article in the Detroit Free Press on Sunday, May 19, 1940.

Despite its outlandish costumes and emphasis on physical comedy, this movie holds a special place in my heart because it was my very first introduction to Pride and Prejudice. And despite the fact that the majority of the film strays far from canon, I like it, and I enjoyed watching it again this week.

So, happy birthday Pride and Prejudice (1940)! Your old-fashioned 1940s charm and desire to please everyone still holds up 80 years later.

Note: The movie posters and still movie photos in this post can be found at IMDB.com. Click here to see more.