Last week I saw the movie, Downton Abbey. It was wonderful and perfect and all I hoped it would be. In fact, I smiled like an idiot through the entire 122 minutes of the film (and, yes, I sat through the credits at the end.).

One reason I love the series, and the movie, is the visual feast they provide in both costumes and settings. To me, every shoe or gown, every setting or detail seems so authentic to the time.

For example, during the series, Downton’s characters frequented a London restaurant that was never named in the show, but I recognized it as Simpson’s-in-the-Strand.

Simpson’s began as a chess club/coffee house in 1828. In 1848 it expanded into the restaurant business. The owners instituted silver-domed carving trolleys, from which they discreetly carved large joints of roast beef table-side so as not to disturb the chess players.

By 1898, when its name was formally changed to Simpson’s-in-the-Strand, the restaurant became a favorite haunt of Benjamin Disraeli, George Bernard Shaw, and William Gladstone.

Simpson’s was so famous, it earned a mention in the fictional world, when Sherlock Holmes suggested “a meal at Simpson’s” to celebrate the successful resolution of one of his challenging cases.

With its grand Edwardian interior, it’s no wonder it was chosen as the perfect location for filming a London restaurant scene for Downton Abbey.

In Season 5 of the series, Lady Mary Crawley met Lord Gillingham and Mabel Lane Fox for dinner at Simpson’s: 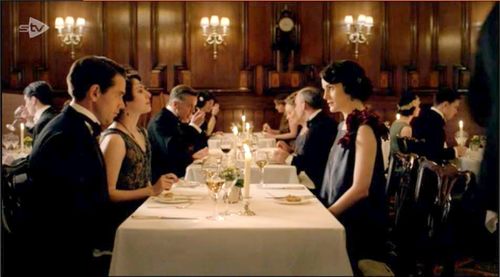 Here’s a broader view of the grand dining room, to give you an idea of the size of the room: 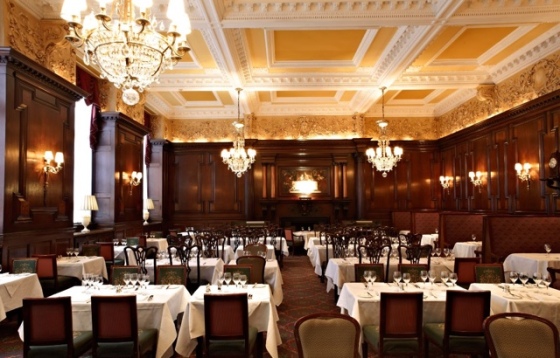 With its dark paneling, it was once known as the gentlemen’s dining room. This 1907 illustration lightens things up a bit so you can see some of the details of the room:

There was also a separate ladies dining room, where women could take luncheon or tea, as depicted in this 1907 illustration:

In 2017 Simpson’s-in-the-Strand closed for several months for renovations, and work was done to restore the ceilings and chandeliers. But you can bet that when the restaurant reopened, the silver-domed trolley carts once again rolled between tables, and skilled carvers served Simpson’s signature beef-on-the-bone on fine china dinner plates, just as they did for Lady Mary Crawley in the Downton Abbey series.

Want to know about another restaurant that was featured in Downton Abbey? Click here to read my post about Lady Edith Crawley dining at Rules of London. 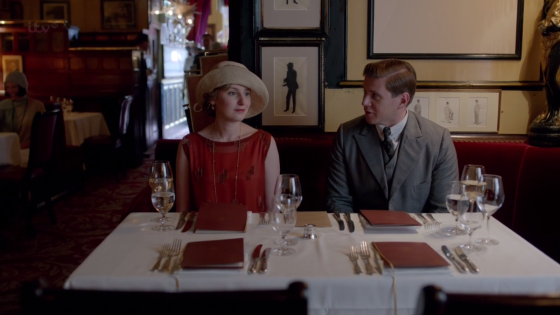 A scene from Downton Abbey, shot at Rules.

2 thoughts on “Downton Abbey and Simpson’s-in-the-Strand”