It’s no secret that I’m a huge fan of the old-fashioned traditional Regency romance. I devoured them back in the seventies, eighties, and nineties. My office bookcase still has a dedicated favorites shelf crammed with Regencies by Rachelle Edwards, Patricia Wynn, Elizabeth Mansfield, Joan Smith, and, of course, the great
Georgette Heyer.

I often reread those traditional Regencies to cleanse my palate after reading a spate of mysteries, thrillers, or contemporary fiction.

What I like most about traditional Regencies is their level of escapism. Although they’re grounded in historical fact, they’re actually pure fantasy. A major component of the fantasy (as a general rule) is the attractiveness of the hero and heroine. You know the Regency lingo: Nonpareil. Diamond of the first water. Complexion like a damask rose. Regency heroines are usually ravishing, spirited, and enchanting, with red lips, dark curling lashes, and impossibly small waists. It’s part of the fantasy to read about a heroine that I wouldn’t mind looking like myself, if given the chance.

Georgette Heyer certainly clothed her heroines in beauty. Venetia was described as “a fine-looking girl; most would not have hesitated to call her beautiful. It was not only the size and brilliance of her eyes which excited admiration, or the glory of her shining guinea-gold hair, or even the enchanting arch of her pretty mouth; there was something very taking in her face which owed nothing to the excellence of her features; an expression of sweetness, a sparkle of irrepressible fun, an unusually open look, quite devoid of selfconsciousness.”

And Arabella was unquestionably the beauty of the family, with “large, dark, expressive eyes, little straight nose, and delicately molded lips” as well as a complexion that was “the envy of less fortunate young ladies.” Arabella enchanted her admirers by a “deceptive air of fragility, which inspired one romantically minded young gentleman to liken her to a leaf blown by the wind.”

I’m not sure how Regency heroines evolved to being such paragons of attractiveness. In Pride and Prejudice—the book that originally inspired the Regency genre—Jane Austen described her heroine in plainer terms. Elizabeth Bennet, while certainly attractive, was not a beauty. Instead, it was her sister Jane who was the acknowledged beauty of the family. When Darcy sees Elizabeth for the first time, he describes her only as tolerable.

But that’s where the romantic fantasy of Pride and Prejudice takes hold. As the story progresses and Darcy comes of know Elizabeth, his feelings for her spark, then flame; and at the same time, the author’s description of Elizabeth changes, too, almost as a reflection of Darcy’s feelings. The more love he feels for Elizabeth, the more beautiful she becomes.

“Mr. Darcy had at first scarcely allowed her to be pretty; he had looked at her without admiration at the ball; and when they next met, he looked at her only to criticize. But no sooner had he made it clear to himself and his friends that she hardly had a good feature in her face, than he began to find it was rendered uncommonly intelligent by the beautiful expression of her dark eyes. To this discovery succeeded some others equally mortifying. Though he had detected with a critical eye more than one failure of perfect symmetry in her form, he was forced to acknowledge her figure to be light and pleasing; and in spite of his asserting that her manners were not those of the fashionable world, he was caught by their easy playfulness.” 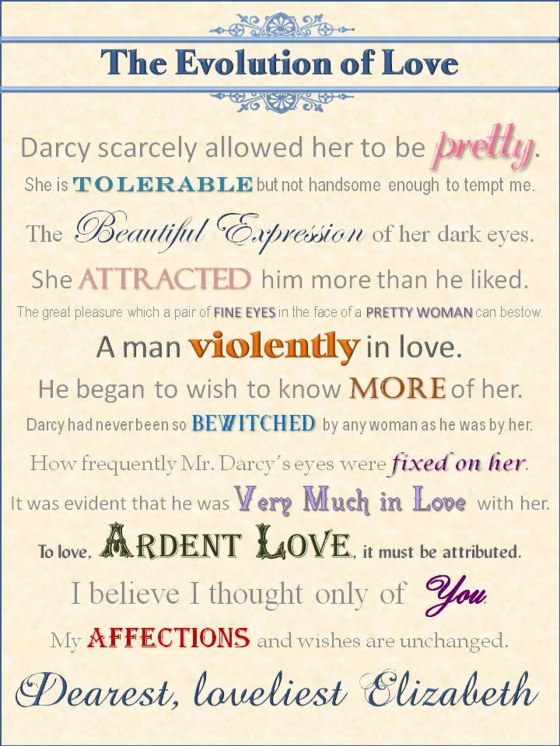 By the end of Pride and Prejudice, she is his “dearest, loveliest Elizabeth.” And that brings me to the part of the fantasy I love the best . . . That every woman is beautiful in the eyes of the man who truly loves her. It’s that perfect ending that draws me back again and again to Pride and Prejudice, and to many of those traditional Regency romances still crammed on the bookshelf in my office.