Although the Prince of Wales claimed that gaming had never been one of his favorite vices, he rarely declined to indulge in the pastime when it was put before him. In his young days, he and his circle of noble intimates visited the most popular and most exclusive gaming establishments of the land: the gaming tables set up in the homes of some of London’s titled ladies. 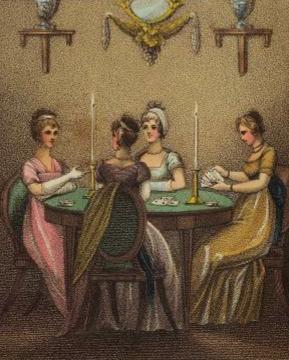 In the 1790s, a handful of noble women with an eye to repairing their shattered fortunes, set up their own faro banks. Mrs. Strutt, Mrs. Hobart, and Lady Elizabeth Luttrell (the sister of the notorious Duchess of Cumberland) all set up gambling tables. 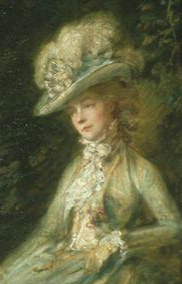 The most celebrated proprietress, however, and the one who most often enjoyed the Prince’s patronage, was Lady Sarah Archer. Lady Archer’s gaming establishment (which she euphemistically called a “garden party”) hosted the most glittering members of the nobility, and she knew how to attract gentlemen of fortune. She was a keen businesswoman who shrewdly turned criticism to her advantage despite the fact that moralists of the time charged that the ladies who frequented her tables served a more iniquitous purpose (which, no doubt, increased her business considerably!). In The Private Life of a King, John Banvard charged that Lady Archer’s Cyprians were “training up to that character under the auspices of the patroness of the night.” 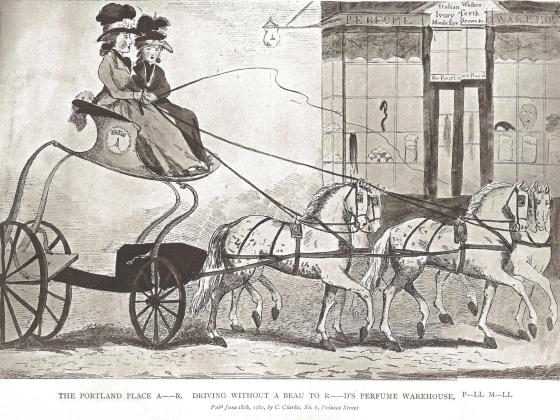 Lady Archer driving to the perfume warehouse in Pall Mall

“In all the arts and mysteries of love,” Mr. Banvard declared, “she was acknowledged to be the paragon of the day.”

One of the most prominent men who fell under the spell of Lady Archer’s charms was the Duke of York, who it was said introduced the Prince of Wales to Lady Archer’s faro table. 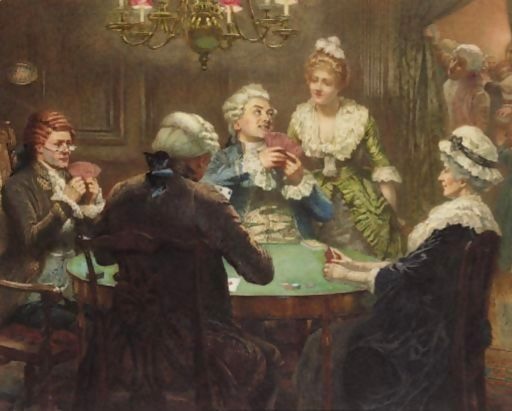 It’s difficult to estimate the frequency of the Prince’s visits to Lady Archer’s establishment; but her acquaintance with the Prince blossomed to the point where she felt comfortably secure enough to invoke his name whenever she thought it might do her some good.

When authorities began fining and bringing charges against illegal gaming establishments, Lady Archer and Lady Buckinghamshire (another noble woman who gave “garden-parties”) were two proprietresses of the trade too conspicuous for the law to ignore. Lady Archer, determined to keep her establishment open, applied to the magistrates for a license under the name of Mr. Martindale (one of her more frequent customers) and not-so-subtly hinted that the license had better be forthcoming because her gaming rooms were patronized by the Prince of Wales. 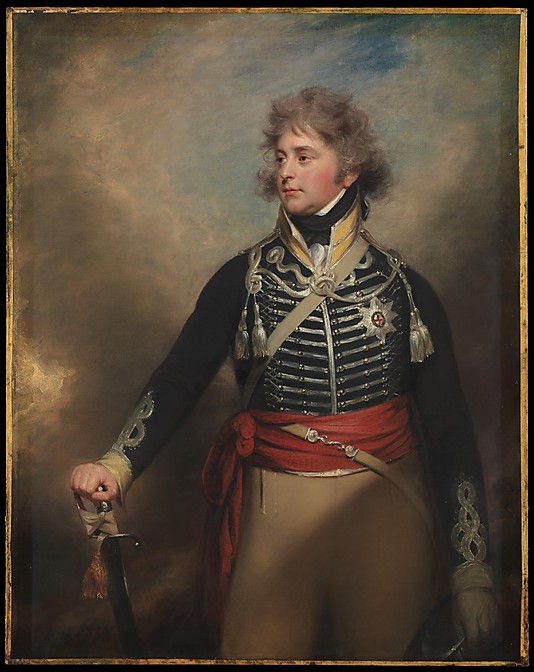 The magistrates were not fooled by the name on the license application and immediately whisked the case up to Lord Kenyon (at the time, Lord Chief Justice of England) to rule on the matter. Lord Kenyon had already made known his disapproval of lady gamesters. “If any ladies of rank were convicted of [gaming without a license] before him, they should stand in the pillory!” he declared. In this case, however, with the name of the Prince of Wales looming over his decision, he did not stand quite so firm. Instead, he referred the matter back to the magistrates, trusting that “they would do their duty fearlessly and refuse the license.” 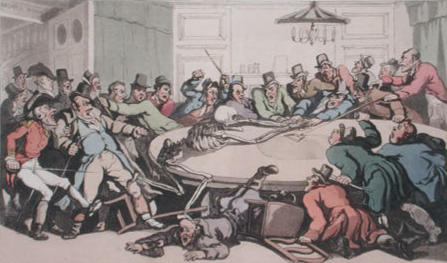 The Gaming Table by Thomas Rowlandson

But the magistrates, it seems, weren’t any more willing than Lord Kenyon to take a stand against the Prince, and before they could rule one way or another in respect to issuing a gaming license to “Mr. Martindale,” Lord Kenyon received a rather spirited letter from the Prince himself.

The Prince wrote: “As I am thoroughly persuaded that in the administration of justice the very last thing that could enter your lordship’s thoughts would be any remark that would fall from your lips to unwarrantably prejudice the public mind against an individual of any description whatever, I am confident that your lordship could never have used the expression which in the notion of every one so decidedly alludes to me . . . It is true that, from applications from many respected quarters, I have been induced to assent to my name being placed among others as a member of a new Club, to be instituted under the management of Mr. Martindale, merely for the purpose of social intercourse, of which I never can object to be a promoter, and especially as it was represented to me, that the object of this institution was to enable his trustees to render justice to various honorable and fair claimants. But if these were really your lordship’s words (which I cannot for a moment suppose) give me leave to tell you that you have totally mistaken my character and turn, for of all men universally known to have the least predilection to play, I am perhaps the very man in the world who stands the strongest and most proverbially so upon that point. I shall not trouble your lordship further upon this strange circumstance . . .”

Lord Kenyon’s response to the Prince was swift and apologetic: “I am confident that I meant nothing offensive to you . . . May I presume to hope that your Royal Highness will pardon this trouble.”

Of course, the Prince did pardon him; and Lady Archer did, indeed, receive her license. Her “garden-parties” continued but private homes were not the only place a gentlemen of title and wealth could gamble. Gentlemen’s clubs offered a comfortable atmosphere where men could gather and talk a bit of politics, do a lot of drinking and engage in high-stakes gambling. 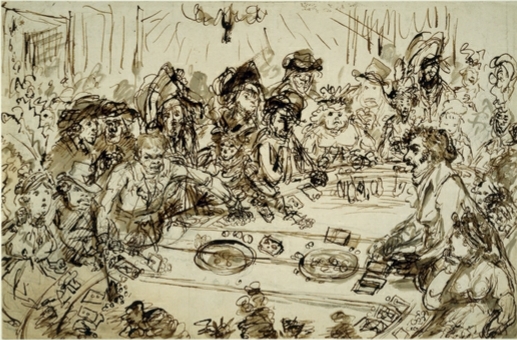 The Faro Table by James Gilray

White’s was the quintessential London club. It was difficult for a gentleman to gain entry and it was famous for its notorious betting book where outrageous bets were recorded.

Horace Walpole wrote in 1744 about a recorded wager of £1,500 that a human being could live under water for twelve hours.

Lord Alvanley wagered £3,000 (estimated at over $100,000 in today’s economy) that one raindrop would beat another raindrop to the bottom of the club’s famous bow window. 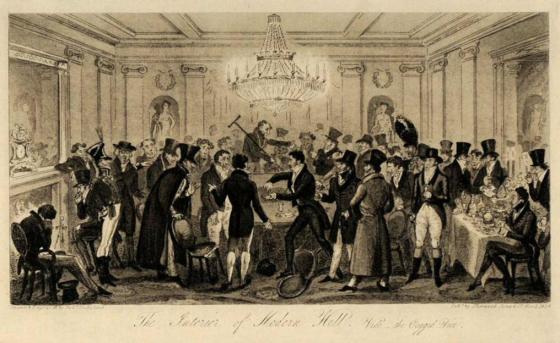 High stakes wagering went on at the tables, too. In Days of the Dandies Captain Gronow tells the story of General Scott, father-in-law of George Canning and the Duke of Portland, who won £200,000 in one night at whist. George Harley Drummond, of the famous banking-house, Charing Cross, lost £20,000 at whist to Beau Brummell. As a result, Mr. Drummond was forced to retire from the banking-house of which he was a partner. 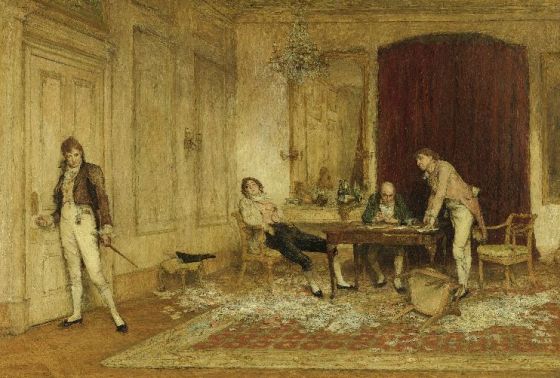 At Brooks’s club the gambling stakes were stratospheric. Charles James Fox, the great Whig politician was bankrupted multiple times at Brooks’s tables. Lord Robert Spencer, brother of the Duke of Marlborough, lost his entire fortune, down to the last shilling, then won it back at faro. Lord Chalmondeley kept a faro bank at Brooks’s that was said to have ruined half the town. A Mr. Paul, who returned home from India with a fortune, lost £90,000 to the faro bank in one night. He immediately returned to India to make another fortune.

Of course, no women were ever allowed inside the hallowed portals of a Regency era gentleman’s club, so all accounts I’ve read are from the man’s perspective. I used my imagination to fill in some blanks when I wrote the gambling scenes in my book A Scandalous Season. The hero is the kind of high-stakes gambler who probably would have graced Lady Archer’s faro table. Under the influence of a bruised ego and a bottle of wine, he makes a foolish wager for a ridiculous amount, much like Lord Alvanley’s wager with Mr. Talbot. Luckily, my hero is wealthy enough to cover his bet and charming enough to win the heroine’s heart. Click here to read more about A Scandalous Season.