I’ve been working on a story that includes a secondary character who is an unabashed Regency Dandy. In his mind, appearance is everything.

In writing the character, I wanted to make certain I accurately described his attire, so I turned to my research files on the king of all dandies: Beau Brummell.

Beau Brummell, engraved from a miniature by John Cook.

When I skimmed through my files and the books I have about Beau Brummell, I realized they focused more on the events of his life and his sense of style, but really didn’t contain any actual descriptions of his clothing.

Beau Brummell, by Hubert Cole, from my library of Regency research books.

Also surprising: there’s precious little when it comes to detailed descriptions of Beau Brummell’s clothing on the Internet, either.

But in my online searches I did find something interesting. On The New School’s website, tucked into their online archives, were several photos of Brummell-inspired fashion from the 1950s.

Why were people in the 1950’s so interested in Beau Brummell? Because in 1954 MGM released a movie that was supposed to be about Beau Brummell’s life. The film starred Stewart Granger as The Beau, Peter Ustinov as the Prince of Wales, and Rosemary Harris (mother of Jennifer Ehle, my favorite Lizzy Bennet) as Mrs. Fitzherbert. 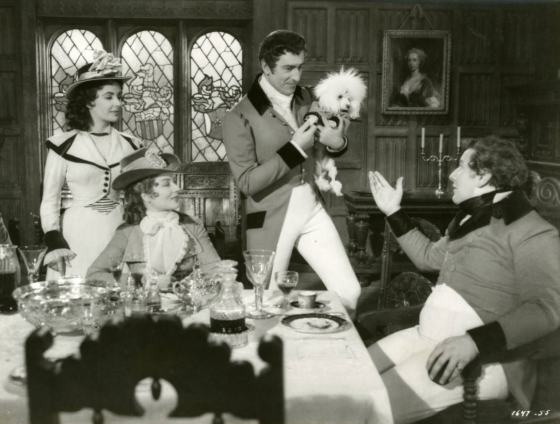 Also in the film: Elizabeth Taylor as Lady Patricia, a totally fictional character who served only to showcase Elizabeth Taylor’s beauty and give Stewart Granger a heterosexual love interest in the midst of all the ruffles and tight breeches. (That’s the kind of thing they did in the fifties. Don’t ask me why.)

The great New York department store Bonwit Teller caught a little of the Beau Brummell bug. They came up with an advertising tie-in to the movie and devoted several of their coveted 5th Avenue window displays to women’s fashion “inspired by” Beau Brummell’s dandyism.

Here’s a photo taken at the time of one of the window displays in 1954 (courtesy of The New School archives):

The female mannequin is dressed in 1950’s style high-waist pants, ruffled shirt, and a waistcoat that mimic the male’s attire. On the floor at their feet is an unraveled reel of film.

The male mannequin is wearing one of the actual costumes from the Beau Brummel movie. Here’s how that costume looked when Stewart Granger wore it in the film: 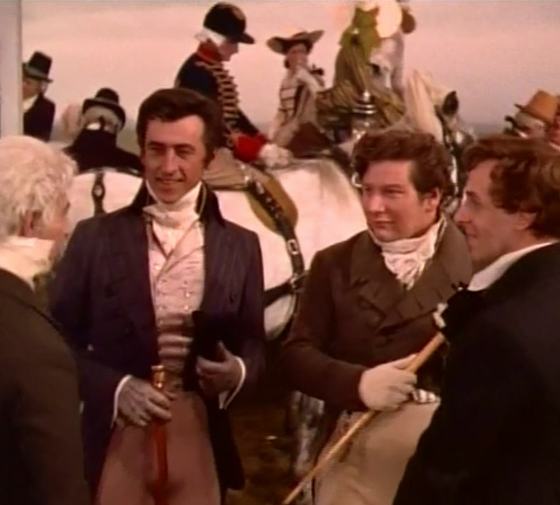 If you look closely, you can see his round hat tucked under his left arm.

Here’s another of the Bonwit Teller window displays from 1954. In this display the female mannequin is again wearing high-waist pants with a seam detail that mimics the brocade on the male mannequin’s military jacket.

He is is dressed in another costume from the movie. Here’s what Stewart Granger looked like in that same military uniform in the film:

There’s a scene mid-way through the movie when Beau Brummell joins the Prince of Wales on a hunt. Bonwit teller depicted the scene, matching their idea of a modern, 1950s woman in a red dress and heeled shoes with a gentleman’s hunting pink, which consisted of a long red coat, white shirt and pants, and black boots.

Here’s the same costume worn by Stewart Granger in the movie. With him in the scene is Rosemary Harris as Mrs. Fitzherbert and Peter Ustinov as the prince. 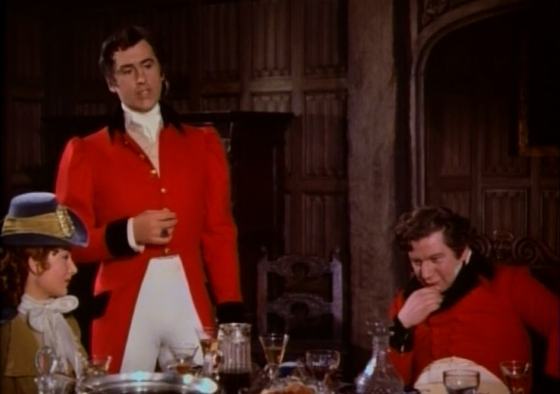 I was so glad to find these images, because they helped me realize Beau Brummell was not all about black tailcoats and understated fawn pantaloons.

Stewart Granger as Beau Brummel in the 1954 movie of the same name.

Those articles of clothing have been the mainstays of any Regency romance hero’s wardrobe since Georgette Heyer first described them in Devil’s Cub in 1932. But the movie costumes convinced me I can introduce color, stripes and pattern to my character’s attire and still hold true to the Dandy’s dress code.

With these costumes as a guide, I was able to write some descriptions of ensembles I think my Regency character will enjoy wearing. I even thought up an article of clothing he’ll wear that will end up playing a major role in the story.

I’m looking forward to sharing all of it with you soon!

In the meantime, if you’d like to see more photos of the Bonwit Teller window displays featuring costumes from the movie, click here to be taken to The New School Archive and Special Collections website.