If you view any website about publishing in today’s digital age, you’re sure to see a post about the importance of book covers. For authors like me who self publish their novels and stories, creating book covers that capture a reader’s attention in a meaningful way is a science worth studying.

When I first started writing for publication, I didn’t have to worry about designing covers. That was handled by my publisher, and other than providing my editor with a cheat sheet listing hair color, eye color, and the main setting where my story took place, I really didn’t have any input about what would or would not end up on the cover of my book.

Thankfully, my publisher engaged the services of a wonderful cover artist named Robert Berran. He had a special talent for depicting the Regency era, and he created cover illustrations for my publisher, as well as others.

In 1997 I contributed a short story to an anthology titled A Mother’s Love. Here’s the cover: 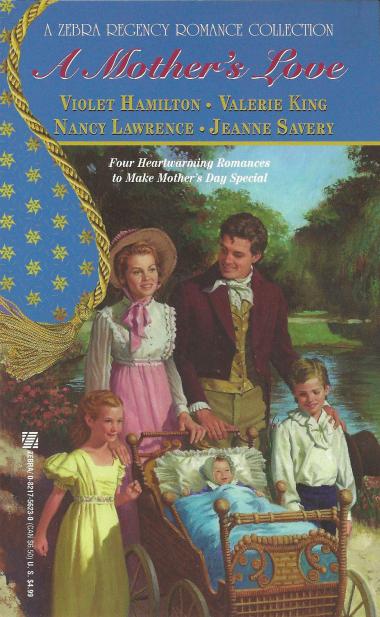 That’s Robert Berran’s artwork you see on the cover, although his signature was cropped to accommodated the title, author names, and branding.

For comparison, here’s a copy of the original artwork. You can see more of the beautiful landscape Mr. Berran created, as well as his signature in the bottom left-hand corner.

With a cover like this, readers knew what they were getting: a sweet, clean Regency romance, with an emphasis on the special relationship between a mother and her children. 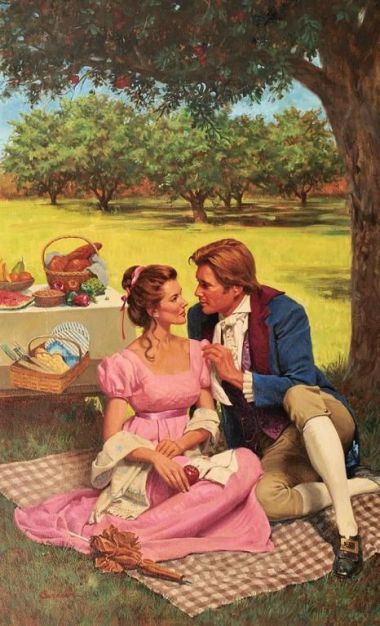 Based on the illustration, what kind of Regency romance would you guess this to be? Steamy and sensual? Sweet and clean? Somewhere down the middle?

I also wonder if there’s any significance to our heroine holding an apple. Perhaps she’s tempting the hero just a little?

The next Robert Berran cover I’ll share was created for a Regency romance titled Scandalous Journey. 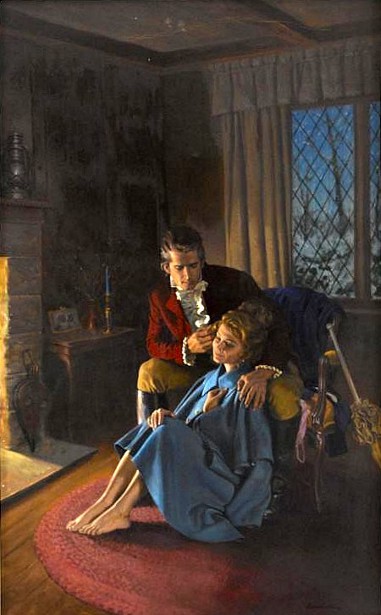 Based on the book’s title and the cover art, I would guess the novel didn’t fall into the sweet and clean category. While it may not have been a steamy novel either, the cover seems to suggest a story that has some temptingly sensual moments, doesn’t it?

On the other end of the spectrum, there’s something about a story that introduces a dog (or a cat, or a parakeet, or any other pet) that signals a story with some lighthearted moments, and this Robert Berran cover art fits the bill nicely: 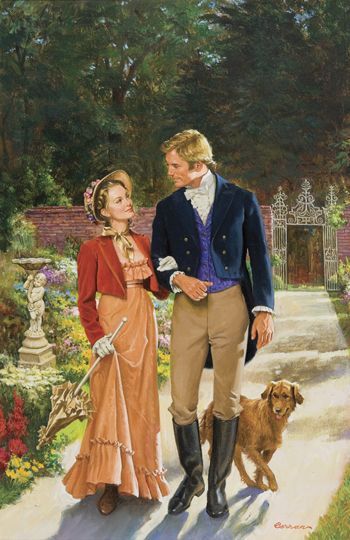 One thing I appreciate after reviewing several of Robert Berran’s cover illustrations is how well he captures the setting of the story. 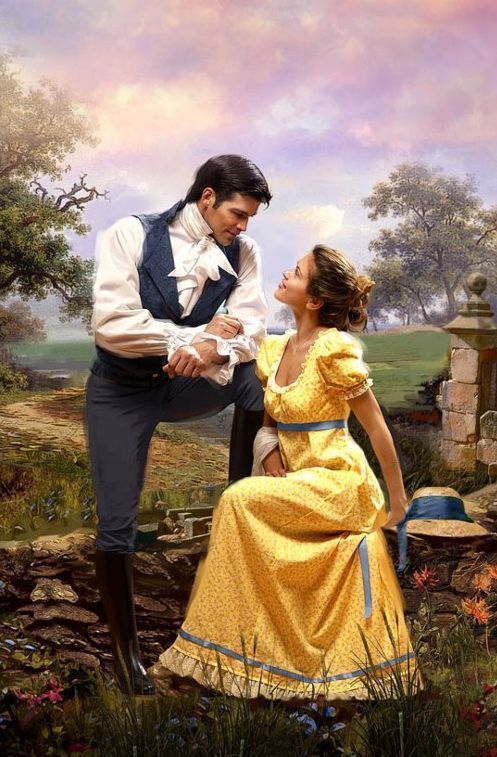 He definitely knows how to evoke the beauty of the English countryside. 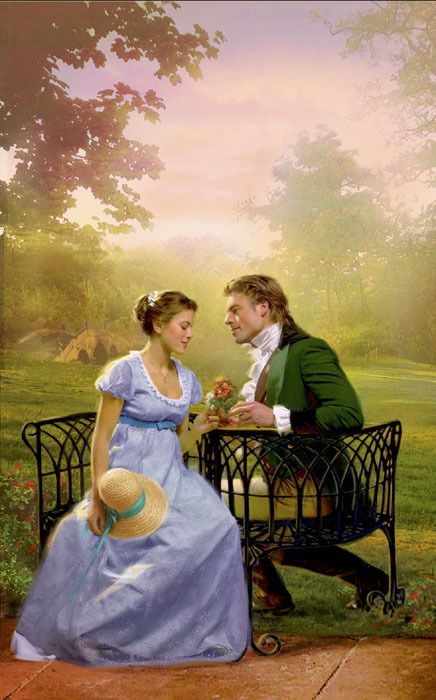 The next cover, with the gorgeous colors in the sky and the stately home in the distance, is one of my favorites. I have to wonder, however, how much of the background made it into the final cropped version of the cover. 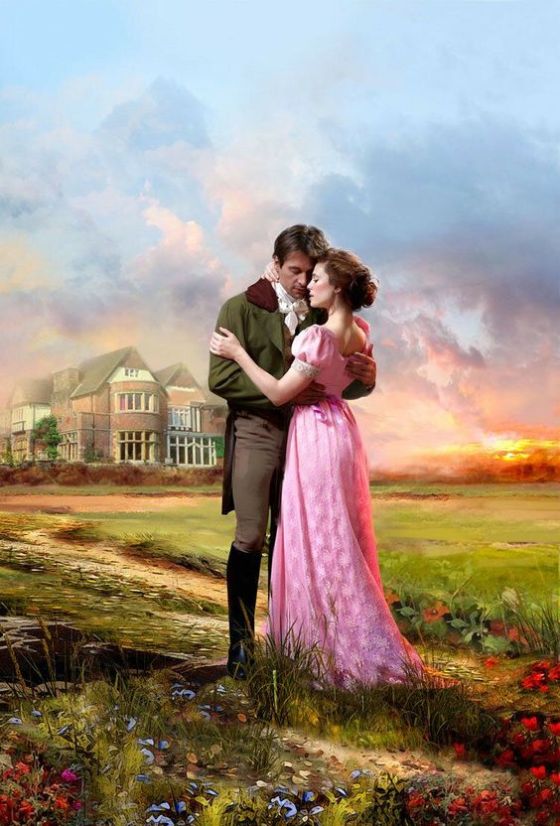 And then there were the covers Robert Berran created that hinted at some action that took place in the novel itself. Like this young lady who just took a tumble on a secluded woodland path: 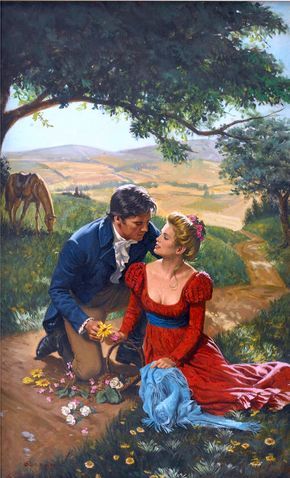 Or this cover, which hinted at the heroine’s talent (and if you guessed she was an artist, you’d be right!).

And then there were his action covers that leaned a little more toward the romantic, like this one depicting a heroine being carried off by her handsome groom on her wedding day: 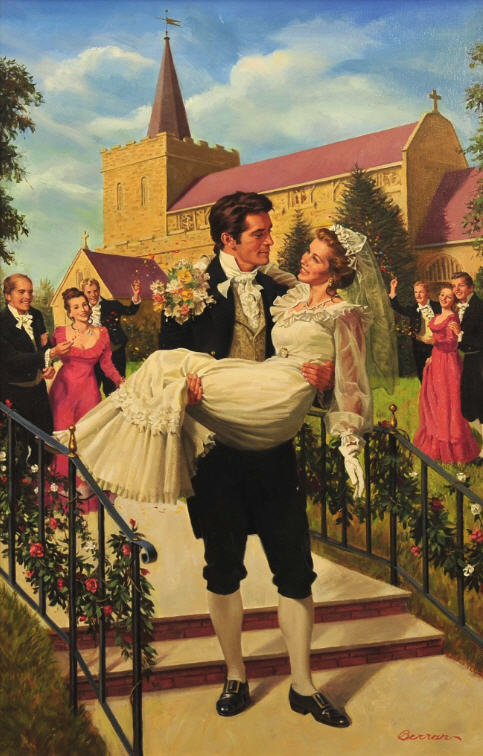 You may have guessed by now that Robert Berran was one of my favorite cover artists. Each of his covers is a unique and lovely work of art, and I cherish the covers he created for my novels.

Did you know some of his original Regency romance cover illustrations are for sale? They pop up from time to time on various art websites. Click here to visit one of those sites.

And if you’d like to learn more about Robert Berran and his artwork, you can visit his website by clicking here.

I’d love to have a full-size original of one of his Regency creations; unfortunately, my budget limits me to hanging framed copies of my old covers on my office walls. But if I ever win the lottery, watch out!

How about you? Do you have a favorite cover artist?

How do you think today’s Regency romance covers compare to covers created in the 1990s or 2000s?