I’m thinking about money today, because I’m getting ready to file my income tax return for 2018 (the deadline for filing is tomorrow here in the U.S.). 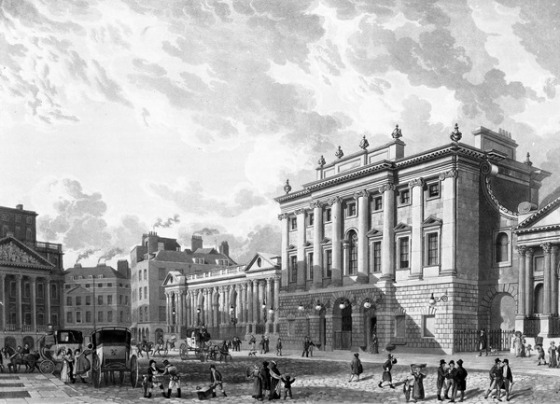 The Bank of England on Threadneedle Street, London. A 1788 engraving by Daniel Havell.

As I bid farewell to an admittedly small amount of money that I have to pay with my return, I was reminded (by my “On This Date” calendar) that today is the birthday of Charles Montague, first Earl of Halifax and founder of the Bank of England. He was born on this day in 1661.

The Bank of England rotunda, when it was used as a stock exchange; from a 1792 etching by Thomas Rowlandson.

My small neighborhood bank (which temporarily holds the money I’ll be paying to the IRS) is all steel and glass. It simply doesn’t have the imposing presence the Bank of England had in Regency London.

Lothbury Court, one of the Bank of England’s interior courtyards, 1801.

The images in this post show how the Bank appeared in Jane Austen’s time, although Jane was never a customer of the Bank of England. Instead, she deposited her hard-earned money at Hoare’s Bank in Fleet Street.

The rear facade of the Bank of England, known as Tivoli Corner. In 1807 the wall niches contained figurative statues.

Whenever I decide to visit my money in person, I go to my local branch, where the first thing I see on entering is wide open area, containing neat rows of desks and a line of teller windows. By contrast, here’s the Bank of England’s Doric Vestibule, as it appeared in 1803.

Interior of the Doric Vestibule, 1803.

My poor little neighborhood bank simply cannot compete with the Bank of England. The Bank’s magnificent exterior, the Great Hall, the vast Rotunda—they were all designed by architect John Sloan to portray wealth and elegance. It was an imposing building, meant to inspire trust and awe.

The Northwest corner of the Bank of England, as it appeared in 1808.

I think Mr. Sloan accomplished his purpose. Here’s a bird’s-eye-view drawing of the Bank of England after it underwent an expansion in 1810, under Mr. Sloan’s direction. After the expansion, the Bank of England covered over three acres of prime London real estate. In the drawing you can see the various courts and interior buildings contained within the Bank’s impressive outer walls. 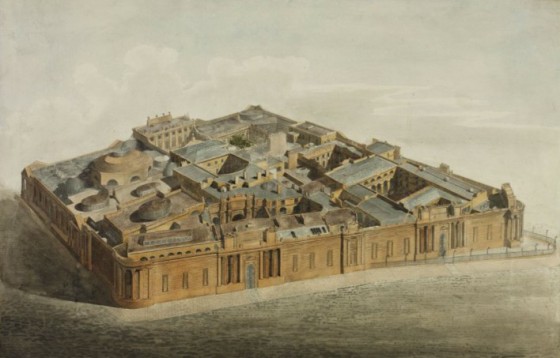 A bird’s-eye-view drawing, showing the interior courtyards and buildings after the 1810 expansion.

It would be a treat to tour the Bank of England as John Sloan designed it. Unfortunately, the magnificent Bank of England was remodeled in 1933 by architect Sir Herbert Baker. In the remodel process, much of the original building was demolished, which, according to architectural writer Nikolaus Pevsner, was “the greatest architectural crime in the City of London, of the twentieth century.”

Despite that, I’d still like to see the Bank of England, and I hope to do so one day. Whatever it looks like now, I have a feeling its design is more inspiring than the dreary but efficient steel and glass  design of my little neighborhood bank.