In England October 18 is St. Luke’s Day, a day to commemorate Luke, the patron saint of artists, physicians, bachelors, surgeons, students and butchers.

October 18 is also Whip Dog Day, an old ritual in which local boys ganged together to round up and literally whip any unfortunate dog they happen to find on the streets.

It was an ancient custom, established in a church in York, when a priest, celebrating mass, dropped one of the consecrated wafers. A stray dog that had wandered into the church snatched it up and promptly ate it. The poor animal was instantly captured and killed, and on the anniversary of his crime all stray dogs are forced to pay the price for the wafer-eater’s sin. 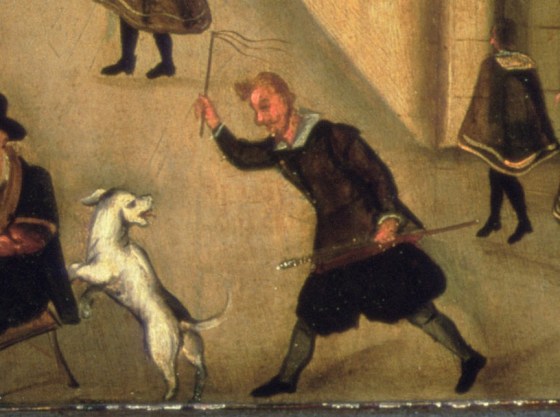 Detail of a 1616 (oil on panel) painting by John Gipkin (fl.1594-1629); courtesy the Society of Antiquaries of London, UK/ The Bridgeman Art Library

I’ve read some accounts that say the practice of whipping dogs on October 18 was confined to York, but further reading tells me that the custom was more wide-spread.

In A History of Derbyshire author John Pendleton writes this about the village of Baslow:

I’m okay with the idea of gently nudging sleeping congregants to keep them awake during Sunday church services; but that whole business about whipping dogs makes me shudder.

Dog whipping remained part of St. Luke’s Day traditions for hundreds of years. It was still in practice during the Regency era in some parts of the country.

I’ve never read a novel set during the Regency in which Whip Dog Day was mentioned, although there is a scene in chapter nine of Georgette Heyer’s Arabella in which the heroine saves a dog from a group of boys bent on tormenting it.

Can you imagine whipping this sweet pup? Neither can I.

Thankfully, the practice of celebrating Whip Dog Day died out in the late 1800s when we humans made the turn and began viewing animals in a more humane light. It’s an observance that is no longer practiced today and for that I—as a lifelong dog lover—am truly grateful.