Mary and the Captain was so much fun to write! As part of my writing process I collected several images that helped inspire (directly and indirectly) different scenes in the story. I thought I’d share a few of those images with you.

We all know Mary Bennet loved to play the pianoforte and the image below made me think of Mary (although I believe Mary would have worn her hair in a much plainer style). Added inspiration: I love the intricate mullions that divide the panes of glass in the window behind Mary.

I found the following image on an old Rafael Tuck French postcard. Although I didn’t have a scene in the book where Mary played for a young child, I though this illustration was very sweet.

In the book, ten-year-old boy Daniel Westover receives a gift of new toys from Kitty Bennet. This 1774 painting by Jean Simeon Chardin shows a boy about the same age as Daniel Westover, playing with a small top, similar to the one Kitty would have given Daniel.

And this painting by Louis Monzies shows three men playing with bilbo-catchers, trying to get the ball in the cup.

When I wrote the scene where Caroline Bingley calls upon Mr. Penrose at the vicarage, I had in mind this lovely watercolor of Oakham Parsonage by John Hassell: 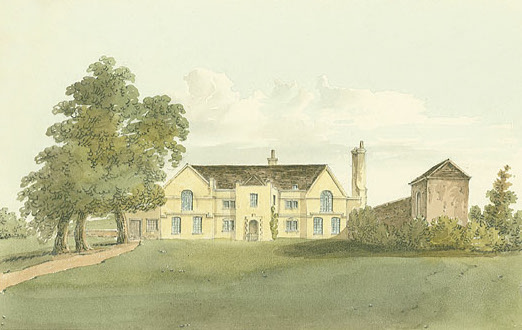 And here’s a second view by the same artist showing Oakham Church. Wouldn’t this be a lovely place to listen to one of Mr. Penrose’s sermons?

Now that I’ve shared these images with you, I wonder if they match the way you envisioned the same scenes in Mary and the Captain?