Ladies of fashion have been using fans for generations as an essential fashion accessory. As Joseph Addison said in The Spectator, “Women are armed with Fans as Men with Swords, and sometimes do more Execution with them.”

At the Opera by Robert Schumann

Mr. Addison described the following encounter with an attractive lady and her fan at a Sunday church service:

She displayed the most beautiful Bosom imaginable, which heaved and fell with some Fervour, while a delicate well-shaped Arm held a Fan over her Face. It was not in Nature to command ones Eyes from this Object; I could not avoid taking notice also of her Fan, which had on it various Figures, very improper to behold on that Occasion. There lay in the Body of the Piece a Venus, under a Purple Canopy furled with curious Wreaths of Drapery, half naked, attended with a Train of Cupids, who were busied in Fanning her as she slept. Behind her was drawn a Satyr peeping over the silken Fence, and threatening to break through it.

It’s possible Mr. Addison may have drawn on his own experience when he wrote:

In Georgette Heyer’s The Masqueraders, Robin Tremaine disguises himself as a woman and makes great comic use of a fan to flirt with Sir Anthony Fanshawe. 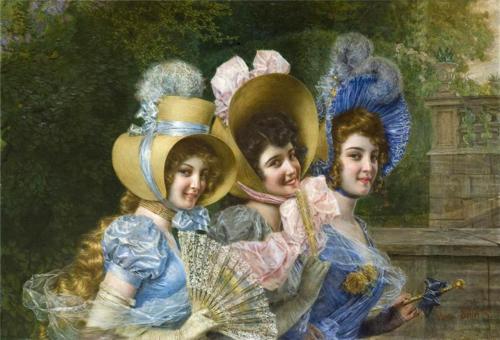 You can read more about the history of the lady’s fan here at Victoriana.